The complete DMSR Series is finally out and ready 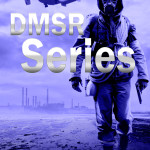 For the first time, all three book in one volume, released now under a new title with a stunning new cover

One cold summer’s day on a flight to the South Pole a C-130 with passengers, fresh veggies and mail for the station comes across smoke and the wreckage of a crash. Further investigation reveals the ship to be of extraterrestrial origin.  The rescue of a survivor and the murder of one of the aircraft passengers by an unknown assailant sets Alex Bird and Team Four from the Department of Military and Scientific Research’s Special Projects on a search into the unknown. As they dig deeper, they uncover evidence of an insidious alien plot. From Station 8 in another galaxy to Camp 100, miles from the South Pole, Alex and Team Four continue to find bread crumbs leading to the aliens responsible for the murder of Team Four’s former team leader.

They gain valuable allies in their quest: the resourceful sheriff from BlackLake, and the jet setting congresswoman with her beautiful pilot, as well as the mysterious Vance.

The chase continues as California is racked by the worst disaster since the dawn of man, triggered by the failed attempt to reverse engineer alien technology. All evidence leads to a second survivor on the alien shuttle crash in Antarctica. Team Four race to capture the murderous renegade, while the DMSR throws its resources into stopping Armageddon. The trail ends at an old air force base and Alex gathers friends for the final curtain. Will they be in time, or will the rogue win as the western part of the United States is torn asunder and joins Atlantis?