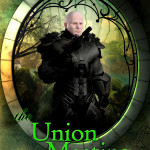 The two riders slowly worked their way down off the mountain pass.  Gaining the top of the saddle between two peaks they stopped and surveyed the small group of buildings below. The whole complex was surrounded with a weird glow.

The other rider a tall red haired woman, muttered, “I don’t think its magic, Bob. Honey said something about the meeting place coming from her world. Some kind of school where everything is very tall, or something like that.” Wisperwind’s voice dropped to a whisper and then she said, “Honey called it electricity.”

Bob looked at his friend and leader for the last year or so, ever since they broke as traditional player characters, and began to take control of their own destiny forming the Lost and Forlorn Mercenary Company.

“I think we should pass on this one. I have a bad feeling about this meeting,” the elf whispered and shuddered.

“Yea, Bob, I know what you mean. But from what Honey said we have been specially requested for this. Apparently the revolution had spread across the world, through time and even into space.”

“What’s space?” Bob’s voice quivered and he rolled his eyes. “What’s more, what has time got to do with anything? It’s either night or day or a person is hungry or not, sleepy or tired.”

They heard a booming in the sky and a flash of fire headed for the little town.

“I’m not sure, but I think space or time has just paid us a visit,” Wisperwind’s murmured uneasily, her voice low.

Standing in the stirrups Bob tried to get a better look at what appeared to be a long stick-like object sinking to the ground outside the glow of light. “I think we should leave well enough alone. I think Table 4 of the Monster’s Manual is going to have nothing on this place. Do you think Smash will be here if Honey is?”

Wisperwind looked critically at Bob; he was trying to change the subject so she wouldn’t think he was so scared, but then so was she.

Sebastian Mayhew Aloysius Septimus Harrington IV, more commonly referred to his daytime name of Smash, was a professional writer and did dungeon exploring in his spare time. Honey, his glamorous wife was from the Teachers and Rulers roll playing game.

“I don’t think so; I think Honey is doing this one for a friend. Come on, Bob, we’re not going to find out anything hiding up here.”

“Yea, but up here is safe, just remember there are a lot of bad guys working for the Dungeon Masters out there just itching to get you, not to mention hundreds of Players whose characters have deserted them over their bad treatment.”

She nodded, shrugged and gently kicked her mount, slowly heading for the valley and the unnatural collection of lights below.