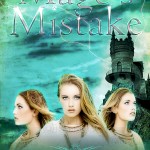 Mage’s Mistake written by K.D Neilson is a fast paced gripping ride. This fantasy adventure, with just a touch of romance, grabs the reader’s attention from the first page to its very last.

K.D Neilson has masterfully depicted his characters with personalities that are both believable and individual. They move flawlessly through his fantastically designed world in which the novel is set.

The plot unfolds at a lively pace typified by a writing style that adds texture to the tale and highlights the author’s ‘down to earth’ persona; all of which come together to create a unique take on this genre, making for a very enjoyable read.

Mage’s Mistake is the fourth instalment in the Tales Of Menel Fenn, the original series by New Zealand author K.D. Nielson, and tells the tale of five characters that are waking up in a very strange world where everything seems familiar. Or, upon closer look, maybe not so familiar at all. Desperate to find out what happened to them, they form a reluctant alliance and set out on a quest in search for answers.

This book is set in a world where nothing is at it seems at first sight and you can tell from the many details that this is a world where Nielson has spent a lot of time on its development. It’s an intriguing and very interesting world with quite some mysteries that are waiting to be resolved. It is a great world to read about and I wouldn’t have minded if the story was a lot longer.
The five lead characters are also quite original: we have a High Elf turned Lich, a Frog Prince, a vampire, a hunter and a woman from our world who ends up in this fantasy world and who is probably the answer to all their questions.
The development of these characters and their interaction is not as original as it could be, but it also isn’t cliché. Nielson does a decent job with how he puts these characters on the pages.

The storyline is quite original and really fascinating. It takes Nielson some time to establish the characters, but once that’s done you get a tale that is quite different than most fantasy stories. It’s a story about lost love and sacrifices, but differently than I’ve read before.

And that brings us to my conclusion. Mage’s Mistake is, despite the fact that it could use some more editing, a solid novella with quite some originality. Nielson has definitely a flair for creating an original world, inhabited with original ideas and characters. A nice fast read.