Dumbing Down the Ogre 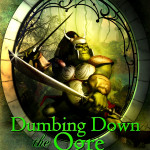 Two riders paused on the hill overlooking the small valley. The woman shook her head thinking of her old Player. Veronica didn’t really have any idea what a barbarian warrior wore. Wisperwind used to wear a halter and a bikini brief made of leather. Wisperwind hated exploring the dungeons when they were left for days with nothing to do till the next time the Players could be bothered returning. The ex-barbarian had bad sinuses and was forever catching cold. Now, almost two years later she had made a name for herself and the mercenary company she had unwittingly formed, The Lost and Forlorn, hunting down and rescuing the abandoned and forgotten characters in the Players’ perverse twisted games. The woman twisted around surveying the valley and looked at Bob. The elf still wouldn’t wear a metal helm. His Player had seen too many movies about the proud warrior with his hair blowing in the wind, killing everything in sight with his deadly bow. Truth be told, the poor guy could not hit a bleeding dragon in the snow from twenty paces with the stupid weapon. Now, both of them were wearing armor more suitable to their present task, locating their latest recruit.

Wisperwind pulled a small object wrapped in a cloth and carefully unfolded it revealing a black orb with a white circle and a black 8 in the center and looked into the clear top.

She shook her head confused. “The holy artifact says that Smash should be here.”

Bob looked at her as she covered the globe back up and slowly dismounted. What a stupid name anyway. But then he sobered, Smash was no dumber than his own name used to be, or their mage’s name long ago. He smiled slightly; Lucia and Alward made a nice couple and the inn, The Lair of the Lich was raking in the money. Still, Smash, what a stupid name.

Bob shaded his eyes and looked at the sun; he still had no idea what time it was. He shifted irritably; his Player came up with the most stupid ideas. Whoever heard of telling time by looking at the sun? He rubbed his eyes; all he ever got out of the exercise was the stupid spots dancing in front of him for a minute or so.

“I don’t know about you, but I’m getting hungry.” Bob looked around the dark forbidding trees lining the meadow, suddenly wishing they had brought the Strike Team with them. “Why does everything have to have dark and gloomy trees, or sinister ruins or old haunted castles? Why can’t the bad guys do evil things in the day, when the sun is out and warm, in a nicely furnished place?”

Wisperwind grimed. “Ya, I hate the old clichés and conditions they forced us to operate under.”

She swung back into the saddle and with a gently kick the red stallion was off. They trotted only a short distance when they rode up on a small rise and the pair stopped in stunned surprise. Right in the middle of the next shallow field was a door. It stood alone, with no walls, nothing at all attached to it.

Bob whistled. “Well, that is something you don’t see every day.”

Wisperwind looked nervously around. “It will be about now as we go down that we will get jumped by random monsters from table 4. Some of them shouldn’t even be together in the same area without killing each other.”

“Come on, Bob, pull up your socks. That could be where Smash is?”

“What is it with you and socks anyway? You know I don’t wear any.”

Wisperwind grinned sardonically. “I can tell every time you take off your boots. Your feet smell worse than Lucia’s Player, that creep, Cliff.”

Bob shuddered again. “I hate Cliff worse than I hate table 4. Yep, you’re right, he did smell worse than my feet, but at least I wash them each night.”

Wisperwind sighed and shook her head, that wasn’t what she said, but she wasn’t going to argue with Bob. He did tend to get things muddled and confused.