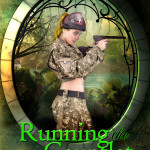 Honey crouched in the dark, her heart pounding madly, blood racing through her veins. She fidgeted as the adrenaline rush coursed through her body. She brought the small wooden shield around so she could move her right leg to a more comfortable position. Her eyes couldn’t help but be drawn to the big ugly welt on the shin of her leg.

“Why are we waiting?” whined the voice behind her.

Honey sighed wearily. Albert Jacobson, the math teacher at the high school was beginning to get on her nerves, both of them.

“Sebastian is still out there,” she whispered as she tried to pierce the smoke curdling among the ruins. “If you make any more noise, this will be over and you will be history,” Honey hissed.

Albert started at the diminutive woman, normally so flawlessly attired, but now she wore a leather tunic and breeches. Her upper torso was covered in a bluish padded armor that extended to her upper thighs. A small helm with a hinged face cover with slits for eyes and breathing was worn on her head. Her blond hair, gathered in a pony tail was plastered to her head by the sweat that poured off her. She grimaced slightly in distaste; she could feel tiny rivulets running down her chest to pool at the waist of her breeches.

“That brute.” He shuddered dramatically. “I don’t see how you and he can, well you know.”

Honey tuned softly, gritting her teeth again the pain that shot though her leg.

“Just be careful what you say next. Sebastian may be on the other side in this ugly game but I promise, if Smash doesn’t get you, I will,” she said coldly.

Honey sighed and sank back against the wall. Things had gone very well in the start. Her squad from AbrahamLincolnHigh   School had thought it would be a lark to enter the Gauntlet, the Fantasy Challenge that other groups had entered. It had originally been started by Gerome, her Player to release some of the tension that the revolt had started to accrue after Wisperwind and her friends had rejected the cruel and neglected behavior of different Players and Dungeon Masters. The attitude exhibited against the player characters, only made Wisperwind angry when she had become self aware. That moment signaled the start of a revolution that had seen hundreds of henchman, extras and other player character flock to join her banner. Then a few weeks ago with a unanimous vote, the unions had agreed to throw their full support to the revolt.

The teachers had practiced for weeks to get the maneuvers right giving them a half baked chanced to survive the challenge. She closed her eyes thinking of the start, Ed Baker, the boys’ Physical Education teacher and Phyllis Edmondson the woman’s, were both sporty, physically fit and sure of themselves. They had been the first two through the door into the ruined cathedral where the challenge was held. Both went down as half a dozen projectiles came shooting out of the dark. Honey had dived for cover, hitting her leg on a sharp bit of wall but Harvey Benjamin, the science teacher right behind her had been fussing with his wand, he took two projectiles to the throat. He dropped to the floor, his feet drumming on the cobblestones. The rest of the teachers had followed Honey and managed to escape the ambush. Now she knew they faced Wisperwind’s Lost and Forlorn, of which Sebastian was one. Forty minutes later, Wisperwind and Bob were both gone, unexpectedly eliminated when Honey’s group was running for cover and they blundered into the duo. Her friends reacted quickly, and Wisperwind and Bob went down under a hail of red projectiles. But not before two of their own had been hit. Honey’s eyes smarted in the acrid air; it was dumb luck that her group drew the Lost and Forlorn their first time out. Honey looked at Albert, what a looser to be stuck with. She didn’t even know if any of the other teachers had survived. After Wisperwind and Bob went down, Smash came charging into the shattered room, along with Almond, a big strapping fighter and Lottie, the group’s nimble thief. In the ensuing chaos Honey managed to get Almond and Stacy Bennet, the music teacher, had accounted for Lottie before Smash got Stacy and Nancy Cartwright, the Spanish teacher. Now Honey was alone with Albert and the fool wouldn’t stop whining.